After a frankly sodden Bank Holiday Monday (I am sure I can still detect an unpleasant squelchy quality to my shoes), we were apprehensive about what Mother Nature would hit us with for Beer by the River. Set in the lush leafy surrounds of Morden Hall Park, the second annual celebration of Sambrook’s Brewery’s birthday would be a festival of beer, music and food held next to the very river their flagship ale is named after – the Wandle. We were promised a bouncy castle, hay bale seating and street food. This could either be a balmy summer paradise or a hellish muddy dash as all the revellers tried to pack into one beer tent.

Thankfully, we got lucky, and the sun was shining as we made our way through the park to the event. By the time we arrived the party was already in full swing, with a 1,500-strong crowd enjoying the late summer weather. Families packed out the grass with their picnics, the delicious smell of burgers wafted across the grass and Jo Elms & Sue Ballingall provided the soundtrack from the stage. We wasted no time in getting ourselves near to the beer.

We started off with a clutch of beers by our hosts, Sambrook’s. This was the perfect time to sample their wares as we caught both the tail end of their summer seasonal, Lavender Hill, and the first batch of their autumn beer, Battersea Rye. Both clocking in at 4.5%, these two beers demonstrate the range the brewery is capable of. Lavender Hill is a golden honey ale with a biscuity nose and surprisingly hoppy punch, whereas Battersea Rye pours deep copper, hits you with dried fruit aromas and comes through bready and bitter on the palate. We round out our first trio with tried and tested favourite, Junction (also 4.5%), a bitter with Challenger, Bramling Cross and Goldings hops. 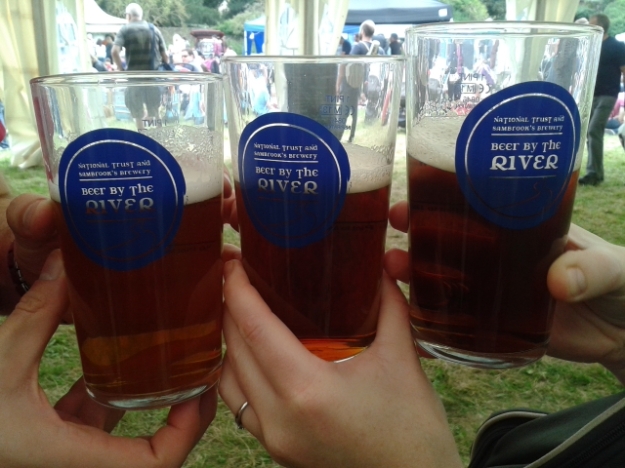 Despite being the hosts of the event, Sambrook’s weren’t the only brewery on offer at the festival. It was interesting to see an eclectic mix of both well-known locals (By The Horns and Hop Stuff from London), further-flung stalwarts (Hogs Back from Surrey, Gadds’ from Kent) and names which were totally new to us (Flack Manor all the way from Hampshire, and Westerham from Kent). So by our second round, we were ready to start mixing things up a bit. We went for a decidedly British selection of bitters: By The Horns’ The Mayor of Garratt (4.3%), Hogs Back’s British Endeavour (4.5%) and Flack Manor’s Flack Catcher (4.4%).

A pint of The Mayor of Garratt comes with a little bit of local history. During the early 18th century people would elect a ‘Mayor of Garratt’ at the same time as the main parliamentary elections in nearby pubs in Earlsfield and Wandsworth. Local characters would stand and give silly speeches as a light-hearted railing against the ruling classes (and an excuse to have a few drinks). By The Horns brewed this very British beer in homage to this tradition, using purely British ingredients, and the beer has the grassy aroma you would expect from home-grown hops.

British Endeavour, Hogs Back’s tribute to the Great War centenary, is of special significance to ICIP: we saw the eponymous hop being grown at Stocks Farm during our visit in April this year. Endeavour is a hop developed through a British Hop Association breeding programme, crossing Cascade with a wild English hop. Hop grower Ali Capper promised us it would have blackcurranty, summer fruit aromas, and this beer delivers that in spades. It has raisin and stone fruit on the nose with a warm, caramel maltiness. We’re looking forward to more brewers experimenting with this new hop in future.

Flack Catcher was sweeter than the other two beers in this round, and had a spiced quality that complements the hoppy bitterness. With the citrusy, orange-like aroma it almost felt a little festive.

The festival also posed an opportunity for some keen amateurs to stand alongside the pros. When we arrived we had been given tokens which would be used to vote in the homebrew competition, the victor of which would win the chance to brew a beer for Cask Ale Week with Sambrook’s. Sadly, it appears that south west London prefers buying its beer than brewing its own, as there were only two entries from Kevin Wright and Andrew Barber, who were crowned joint winners after the vote was declared too close to call. By the time we made it to the tasting table our fellow festival-goers had snaffled all the samples, so we can’t comment on this outcome – but we’re looking forward to the launch of the collaborative brew later this month.

Unable to get our hands on the award-winning homebrews, we fought our way back to the bar. We nabbed a Westerham British Bulldog (4.3%) and a Gadds’ She Sells Seashells (4.7%). The British Bulldog was crisp and toasty with hints of toffee and a floral nose from the Goldings and Progress. She Sells was much lighter and more zingy, hitting the schnoz hard with Cascade lemon and pine and delivering on flavour with a lingering dry bitterness. Perfect summer drinking. We also tried a kegged offering from Sambrook’s – Battersea IPA (6.2%). This is a new addition to their line up, only launched in May 2014 and their first foray away from traditional cask ales. Chinook and Citra ramp up the aroma and the hop flavour spike we’ve come to expect from an IPA. It was a shock to be drinking something cold and carbonated after so much real ale, but it was a refreshing interlude.

We decided we needed to stop for food, and after agonising over the burgers and fish and chip van we went for Pizzarova, a family run pizza company run out of the back of a customised Land Rover. The sourdough crust and delicious melty cheese made us weep when we discovered that they are based in FRICKIN’ DORSET. The humanity. If you are lucky enough to live in Dorset, they frequent Sherborne, Bruton and Castle Cary. I am already trying to work out how long the commute to Moorgate would be.

Our pizza break was a good opportunity to kick back and enjoy an impassioned speech by Beer Sommelier Jane Peyton. After reminding us of the health benefits of our favourite tipple (full of B vitamins, potassium and antioxidants!), Jane encouraged any beer philistines to get up to the bar and give the great range of ales a go, especially any women who still mistakenly viewed it as a male drink. “If you don’t like it, try another,” she implored, “and another, and another!” Great advice.

We were flagging after a long day of boozing and starting to lose track of our tokens so we decided to head back to the bar for a final round.

We tried Sambrook’s kegged version of Battersea Rye, with a slightly higher ABV at 5.8%. Like the IPA, this was launched recently as a toe in the craft waters and contains no less than four different grains – Maris Otter Pale Ale Malt, Malted Rye, Crystal 400 and Chocolate Malt. It is rich and caramel-like with yeasty, bready notes and a spicy, fruity flavour. We were impressed, and tried not to argue over whether it’s better from cask or keg.

We wrapped up with By The Horns’ Diamond Geezer (4.9%) and Hogs Back’s HBB (3.7%). Diamond Geezer is a red ale, sweet and malty with a bitter, floral finish from the American Willamette hops. HBB had a lighter touch with grapefruit aromas and a lingering, acidic bitterness on the palate. The perfect aperitif.

The party looked set to continue on into the evening, the families were beginning to thin out as the evening crowd moved in and the music cranked up. We were fair sloshing with the good stuff by now and were ready to get home and order a curry, so we slipped away past the babbling Wandle into the gloaming, already looking forward to next year’s Beer by the River.

Want more? Check out our tour of Sambrook’s Brewery, our interview with Jane Peyton and coverage of her book launch. 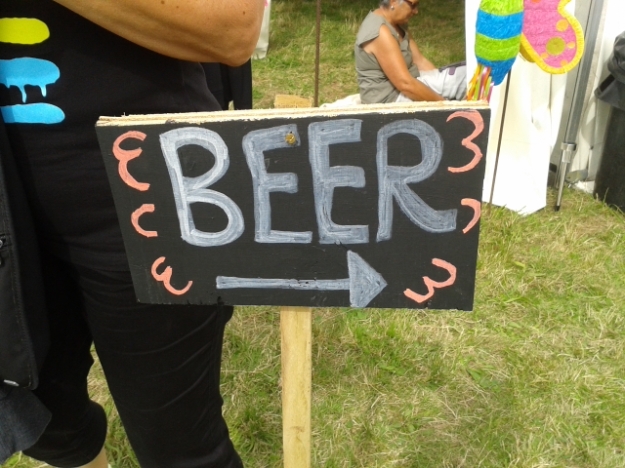