*Wanted to call this “Boozin’ with the Moomins”. Found out Moomins are Finnish. Did not visit Finland. For helvede!

Mr Pip and I aren’t really very good at holidays.

Well, more accurately, we’re not good at relaxing holidays. We’ve never done a beach holiday together, never visited a spa or willed away multiple hours in a café watching the locals. Our holidays are usually planned with almost military precision: armed with maps and Lonely Planets we storm our way through capital cities and tourist spots, leaving a string of museums, stately homes and art galleries in our wake. Our recent trip to Scandinavia is a case in point. We were there for ten days and managed to clock up, by our estimates, over 60 miles of walking (no mean feat given that one of those days was entirely sedentary on trains and boats in the Norwegian fjords).

While I’ll admit to being the driving force behind this, Mr Pip is very much the Lieutenant to my Captain. We make good travel companions because we enjoy a similar – unbalanced – mix of doing stuff and chilling out (i.e. sleeping off all that walking). I find just immersing myself in being somewhere completely “other” relaxing in itself – being able to leave all thoughts of work and the washing and the fact that the front door is sticking behind me.

Basically, what I’m getting at here is… I didn’t really factor beer into my holiday before we went. I wasn’t planning to sit in the bar all day. I thought about visiting Hamlet’s Castle and seeing some Viking boats and seeing the fjords, but despite beer being a massive part of my life, we only really got as far as booking a dinner at a brewery-cum-restaurant in Copenhagen for our anniversary before we whizzed off to Denmark.

And that’s what made the boozy wonder that was our Scandi trip all the more special.

Our first taste of Scandi beer came in the form of a Tuborg Green (4.6%), sitting in the sun, with a plate of herrings next to the canal in Nyhavn, Copenhagen. You couldn’t get any more Danish if you tried. But this was exactly the type of beer experience I had been expecting – and not getting excited about. The beer was stock lager, the type of stuff I purposefully do not touch at home. I noticed that most of the restaurants and bars we looked into seemed to have the same, ominously green Tuborg and Carlsberg taps. “Oh well”, I thought, “I can deal with soft drinks and the occasional gin and tonic this holiday”.

Then Nørrebro Bryghus came out of nowhere and rocked our world. 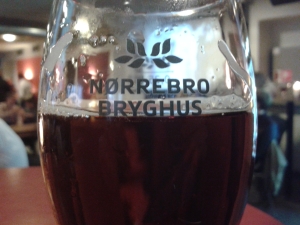 Situated in what The Guardian once likened to “the Brixton of Copenhagen”, Nørrebro Bryghus is one of many trendy bars and restaurants popping up in this part of Denmark’s capital. Launched in 2003, the brewery has always had food and beer matching in its sights, marrying the rising popularity of both Scandi food and craft beer: “The brewhouse politely reminded the Nordic foodies something that Danish gastronomy seemed to have forgotten,” trumpeted their website, “that the best drink in combination with Nordic flavour is often the wonderful Nordic beer.” They also claim that they could very well be “the best beer restaurant in Scandinavia”, so we didn’t really think we could pass this one up (especially since we didn’t fancy taking out a second mortgage to eat at Noma).

Initially drawn in by their five-course tasting menu with matched beers, we arrived early for our reservation and started off with a drink in the downstairs bar. Set against a backdrop of the brewery itself, which is open for visitors’ inspection, the bar was bustling and cosy. The beer menu immediately got our hearts racing. American brown ale! Bock! Barley wine! We quickly began our descent into heavenly beery oblivion.

It was a night to remember.

Our food and beer matched menu was exquisite; exactly what we had dreamed of when we had read about “New Nordic Cuisine”. It was so good, I accidentally ate all of my first course before I thought to take a photo. We also spent ages waxing lyrical to each other full-mouthed across the table about being served what literally appeared to be clouds made out of mustard.

The menu was as follows:

Our minds well and truly blown, we staggered back to our hotel ready to totally reassess Denmark’s beery offerings. As if by magic, our perception filters reset themselves. Yes, Tuborg and Carlsberg were ubiquitous. But we began to spot names like Nørrebro and Herslev Bryghus popping up on menus in restaurants, and even found bottles for sale in local supermarkets. We found a microbrewery, Bryggeriet Apollo, right in the heart of touristland, next to Tivoli, and an American diner offering a range of both local and international brews. Beer came back into focus for us, and before long we were google-mapping frantically in an attempt to find one of the Mikkeller bars.

“Gypsy” brewer Mikkeller (Mikkel Borg Bjergsø) doesn’t run a brewery in the strictest sense of the word, and has instead been traveling around brewing collaboration brews with other breweries since 2006. Initially created with friend Kristian Keller, hence the name, Mikkeller brews Noma’s house beer, exports to over 40 countries and has bars in San Francisco, Stockholm and Bangkok. A search for Mikkeller on Untappd now brings up a mind-boggling 700+ results. So you can see why we were keen to sniff out one of the bars in city where it all began.

After a particularly long day of walking we ended up at the original Mikkeller Bar on Viktoriagade, thirsty and expecting great things. Tucked away in an area with a distinctly Shoreditch-y vibe, the bar was minimalist and trendy, and had a pleasingly massive blackboard listing 20 beers on tap, as well as a huge bottle menu.

We also had a mad social media moment in Mikkeller Bar – Mr Pip had a notification from Twitter informing him that several people he followed had started following Arizona Wilderness Brewing. He looked over to the bar to see brewers Jonathan Buford and Patrick Ware, who were still in town after the previous weekend’s Copenhagen Beer Celebration. Before long we were engaged in happy, boozy conversation. Beer really is an international language, and its speakers are the friendliest in the world.

We had held off the inevitable visit to the Carlsberg Visitors Centre until our final day in Copenhagen. A little outside of the city centre, we kept finding excuses to put it off, and our beery epiphanies with the likes of Nørrebro Bryghus and Mikkeller weren’t making the prospect of free Carlsberg any more appealing.

So we were pleasantly surprised by our very enjoyable visit to Carlsberg. Blighted by memories of sipping from lukewarm green cans at grotty university house parties, it was easy to forget that Carlsberg has a long and interesting history. The visitors centre is housed in the original brewery which dates right back to 1847, and guides you through the brewery’s story, from J.C. Jacobsen’s stagecoach journey from Munich with his precious brewing yeast stored in a hatbox, through to its takeover of Tuborg and climb to 4th largest brewery group in the world. The museum, spread through the historic buildings, is impressive, and supplemented by the largest collection of unopened beer bottles in the world… over 22,000 at last count. We thoroughly enjoyed looking out for familiar labels… and finding some interesting international versions of the Carlsberg brand. The centre also boasts working stables where their horses – now only used as “brand ambassadors” – are kept.

When we saw that our ticket had included two free drinks, we have to admit we weren’t that enthused. I even considered passing up on the offer. But after a bit of a walk from the train station and a wander around the complex we quite fancied a drink, and we approached the bar with some trepidation. It was with pleasant surprise that we saw that there were a few more interesting beers on offer.

We took the opportunity to try a Tuborg Rød (4.3%), a seasonal dark lager only brewed in May each year. While this wasn’t exactly Mikkeller, it was substantially more flavourful than my dim memories of those green cans all those years ago. Perhaps I had been wrong to dismiss Carlsberg out of hand for all this time.

This feeling was cemented by our second freebie. On the recommendation of the bartender we went for the Jacobsen Original Dark Lager (5.8%), brewed to the oldest recipe in the Carlsberg archives, from 1854. Jacobsen is Carlsberg’s “upscale” arm, founded in 2005 and making some more varied styles such as wit and dubbel. We were impressed with the Dark Lager, and a little upset that their offerings only came in 750ml bottles in the shop (as our luggage was already stuffed with Nørrebro bottles by this point).

We had come a long way from our initial disappointing glass of Tuborg in Nyhavn. Denmark had shown itself to have plenty to offer in terms of beer, and we wished that we had done a bit more research before arriving. But time was against us, and Denmark’s cousin to the north, Norway, before us. Surely, we thought, Norway can’t top this.

We were wrong. So wrong. And you can find out just how wrong, in part two.