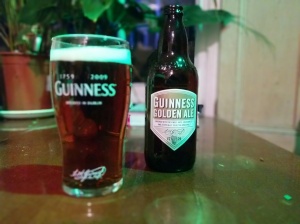 We loved the beers that emerged from Guinness’ last Brewers’ Project, historic reinterpretations of a pair of 200-year old porter recipes that transmogrified into a Dublin Porter and a West Indies Porter last September.

So we were excited to hear that, for beer experiment number three, a brewery famous for making a beer so chunky and dark it was practically a health food supplement would come out with a golden ale.

Born in a microbrewery at the Guinness brewery in Dublin, the Golden Ale pours crystal clear and sunset-amber, with an exuberantly cloudy head that did slightly collapse in on itself. There’s a lot of fruit on the nose, which makes its initial dryness even more surprising – this is a malty, biscuity dryness rather than a hoppy one. Speaking as someone whose palate is regularly blown by IIPAs and nuclear saisons, Guinness’ Golden Ale – by virtue of its extreme lightness – tasted to me honeyed and sweetly light, weirdly not unlike the Kolsch I sampled in Cologne recently. 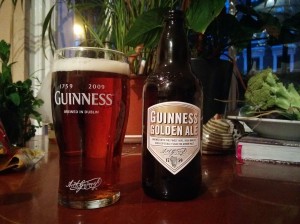 Spookily, something in this beer did remind me of Guinness’ trademark stout. The Golden Ale is brewed with Guinness yeast, but I doubt I could tell one yeast strain from another if it walked up and gave me its business card, so this association could be down to a: reading the press release a lot and b: obstinately drinking it out of a Guinness glass for kicks. Nevertheless, like many beer drinkers, I have a special place in my heart for Guinness – its Dublin HQ was the first brewery I visited, it was my major source of vitamin intake throughout university – so it was nice to get a heady whiff of something so familiar.

Brewer Peter Simpson said this was intended to be a balanced beer “that would appeal to a broad range of people”. I’d agree with that – at 4.5% abv, I could imagine happily drinking pint after pint of this with a Sunday roast. Ideally outside in a sunny pub garden. But it’s a session, not an event, ale; it’s polite, to hop-bomb pales like Kernel and BrewDog what Guinness’ stout is to a bottled-black hole from Mikkeler.

Renowned for their stout, Guinness was always going to fall foul of the seasons among those drinkers who wouldn’t touch a dark beer after the 30 May. This Pale is a truly respectable shapeshift onto the premium ale market – starkly different (in colour alone) but true to its roots. For a company that’s largely been brewing the same beer for 256 years, that’s not bad going.

Drink: with food, sunshine, reckless abandon; if you’re a fan of other Golden Ales like Fullers’ Honeydew

Available in selected pubs and shops

1 thought on “When is a Guinness not a Guinness?”