I’ll admit it – I am pretty anally retentive. A worrywart. An Order Muppet. I plan everything in advance. I’ve always got a pen. I love to make lists and – more importantly – tick off said lists (mmm).

So, when I was handed my pint glass and programme for this year’s GBBF, and staggered into the barrel-vaulted spectacle that is London Olympia, panic began to set in.

So many beers. So. Many. Beers. The completist in me started nervous twitching as I struggled to accept that no amount of planning or tactics would allow me to drink over 900 different beers, ciders and perries in just five hours. 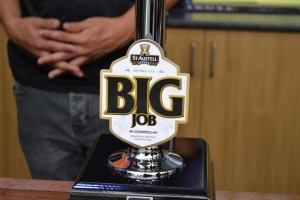 Luckily, my neuroticism was immediately soothed by Mark Payne, Off-Trade Sales Manager from St Austell, who offered me my first drink of the day at a pleasantly numbing 7.2%. This was Big Job Double IPA, big brother to their popular IPA, Proper Job (clocking in at a more sedate 4.5%). A fantastic burnished caramel colour, this heavy hitter is hopped with Citra and Centennial, and has a lightness which belies its high ABV. Mark told us that they use Cornish Gold malt and attenuate it until nearly all the sugar is gone, allowing those hops to really sing. It’s a good start.

Next, we made the mistake of visiting the USA cask beers bar. I say “mistake”, because once we’d checked out the list of available brews, there was a serious danger that we would never leave, and we’d only been at the festival about fifteen minutes.

Surrounded by a huge throng of beer fans, this bar was perhaps one of the most popular of the festival, and for good reason. The sheer variety of beers on offer was outstanding – everything from a 4% wheat to a whopping 9.3% Imperial IPA – and we started off with a Franklin’s Psychedelic Smokehouse (5.3%), a smoked, sour ale. It poured light with a seriously smoky nose, like getting a delicious faceful of BBQ and bacon, but then shocked the palate with a light, zinging acidity.

Next we went for something at the other end of the scale – a dark, rich Left Hand Milk Stout (6%). We’re usually sceptical of milk stouts because we’re frankly evangelical about Bristol Beer Factory’s take on the style. But this impressed us mightily. Hopped with Magnum and US Goldings, this stout was incredibly smooth and seemed to stealth its way down your gullet, leaving a strong, cocoa-nib bitterness behind. Dreamy.

Promising ourselves “one for the road” before we headed off to… uh… the other 21 bars, we went for a Buckland Brewery Ginger Pale Ale (5%), brewed with macerated ginger. A deep coppery colour, this promised a lot on the nose but didn’t quite deliver on taste, although we got a pleasant ginger tingle lingering at the back of the throat.

We did finally tear ourselves away from the delights of the good old US of A… here are some of our other festival highlights.

I was confronted with an offer I couldn’t refuse when I spotted Kissingate Brewery’s Black Cherry Mild (4.3%). I had initially made fun of this beer in my GBBF preview post, saying that it was the kind of gimmicky fruit concoction I would select when already inebriated, only to find that it was rubbish. I then found out that it had won numerous awards, and, having tried it, I now see that I should eat not only my words but also my notebook, pen and GBBF souvenir pint glass. It was delicious – smelled like a bowl of fresh cherries but had no cloying sweetness, just a rich, smooth mouthfeel and a really nice dry finish. Just goes to show that no matter how much beer you try, there will always be something to surprise you!

When we fancied something lighter, we were drawn to a beer by Jo C’s Norfolk Brewery – Norfolk Kiwi (3.8%). The brewery was established by Jo Coubrough and this beer is a tribute to her husband Chris, a native New Zealander. It uses locally-grown Maris Otter and a mixture of British and New Zealand hops, giving a tropical, zesty punch despite the modest ABV. Refreshing and extremely quaffable.

We couldn’t pass up on an offering from Bristol Beer Factory. We first discovered this gem of a brewery on a cottage break to the West Country in 2011, when we popped into a beer festival at The Tobacco Factory. This was when we fell in love with their Milk Stout in particular, but their other beers have never disappointed and we hadn’t had the opportunity to try the 3.8% Nova pale ale before. This beer has a light malt base (Maris Otter, CaraPils and wheat malt) providing a perfect, subtle backdrop for the hops, coming through zesty and fresh with a grapefruit tang.

It was nostalgia that initially encouraged us to give Exe Valley Brewery’s Winter Glow (6%) a try – Mr Pip and I are Exeter University alumni. This is a traditional old ale, and usually the brewery’s winter seasonal. While we weren’t entirely sure why it had showed up at a beer festival in the middle of August, we enjoyed the rich, dried fruit and malty nose and the dry bitterness after the 6% punch. Hope that we spot it around once the nights draw in a bit to enjoy it in its proper environment!

After a pork roll to soak it all up and much wandering, sampling and poring over our programme, we decide to visit to the cider and perry bar, which we often end up neglecting. Since our trip to Stocks Farm earlier in the year and being introduced to the wonders of cider, we felt we needed to at least try a couple.

We begin with an offering from Lancashire, Dove Syke Cider’s Ribble Valley Gold. This comes in at 6.5% and is described as “medium dry” on CAMRA’s scale. It is delicious – no cloying sweetness, but not too acidic either. Encouraged, we persevere with a taste of Oliver’s Yarlington Mill (also 6.5%), which had a little more sweetness than the Ribble Valley but not to the point of excess – it still had a good level of dryness to round out the flavour. We enjoyed chatting to one of the CAMRA volunteers (complete with pirate hat) on the cider bar about the different varieties on offer and were very grateful for his recommendations and tasters. Cider is still a bit of an undiscovered country for us but we’re certainly going to continue our exploration of it in future!

We have to fight through the crowds to get near enough to hear the announcement of the Champion Beers of Britain competition. With eight categories as well as an overall “Supreme Champion”, there are too many winners to list here, but special ICIP claps on the back must go to our friends at Oakham Ales who took Gold in the Golden Ales category as well as Silver in the Supreme Champion contest for Citra (4.2%), and also the guys at Sambrook’s who took joint Bronze in the Bitters category for Wandle (3.8%).

The results of the Supreme Champion contest were announced by Bruce Dickinson of rock band Iron Maiden – an avowed real ale fan who has brewed his own successful beer with Robinson’s Brewery – Trooper (4.7%). The announcement of first place in this year’s competition – Timothy Taylor’s Boltmaker (4%) – is met with some consternation by the crowd. “Did he just say Timmy Taylor’s?” someone asks behind us, while the chap to our right goes with a more forceful “Timothy Taylor’s? Fuck off!” As the crowd disperses, we hear another festival-goer commenting to a friend “it’s average at best”. It’s obviously a controversial decision. We haven’t tried Boltmaker so we can’t comment, but we’ll be keeping our eyes open for it in future to see what we think.

The atmosphere at the festival was characteristically jolly, and although the gender ratio is still way, way off (still the only place in the universe with no queue in the ladies’ toilet!), we spotted plenty of women enjoying their beer and there was thankfully no sign of the sexist poster seller that so disappointed us last year. We did slightly question the choice of the “circus” theme (lots of strongmen etc vs scantily-clad female acrobats strewn across the branding) which still made it all feel a bit masculine… but let’s face it, I look frickin’ distinguished with a moustache.

Overall then – a great day with some top notch beers. It was fantastic to see such a broad range of different styles and countries represented, and there really was something for everyone. There are up and down sides to attending on Trade Day – the entire programme is still available, for example, but you don’t get the added fun of talks and signings by the pros or live music. But that wasn’t going to spoil our day.

Being the pernickety fusspot I am, I am already looking ahead to next year and working out my tactics. If I attended for all five days of the festival next time, that’s just… 180 beers a day… which is just… er… 60 pints, if I drink thirds…

I’ll get back to you next August.

You can read our review of last year’s festival here, and also take a look at our investigation into women’s attitudes towards beer and festivals here. Check out more pictures from the event on our Facebook page. 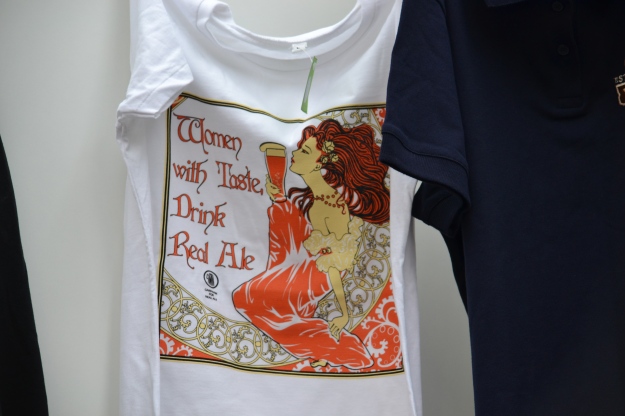