CAMRA’s Good Beer Guide 2014, published this week, revealed that the number of breweries in London has doubled in the past year. How local can beer get? And are micro-brew-pubs the latest way to get in on the craze?

What’s bubbling away beneath the bar at your favourite boozer?

If you’re lucky enough to live near one of England’s more ambitious pubs you could be waiting for your pint on top of the next beer phenomenon: pub-run microbreweries. This weekend It Comes In Pints went underground at The Queen’s Head pub in Kings Cross, central London, to discover the future of local drinking beneath an unassuming hatch behind the bar.

Pausing but briefly to put away Redchurch Brewery’s Shoreditch Blonde and Weird Beard Brew Co’s Black Perle, ICIP gamely scramble down the cellar ladder after pub owner and brewmaster, Nigel Owen. It’s jacket-discardingly hot in the small underground brew room, around which various enormous vats bubble and gurgle alluringly. We’ve timed our visit just right: with barely concealed excitement, Nigel opens the lid on an enormous plastic fermentation vessel. The yeast has dropped – a sign, he tells us, that the brew is almost ready.

“That’s really exciting,” he explains. “Because the temperature has been quite variable in here it’s taken a little bit longer. When you ferment beer, the fermentation is usually on top, and when it’s ready, it kind of drops down to the bottom. So that beer is now ready. We can take the yeast out and it will be ready to serve after it’s spent some time in the keg.”

The Queen’s Head hopes to launch this – the first of its range of single hop beers – this week, at £3.50 a pint. They have used three new world hops – known for their citrus-y kick – think frosty, Californian Pale Ales – Citra, Cascade and New Zealand’s Pacific Gem.

“They all have distinct flavours, they are full of flavour. Pacific Gem isn’t really used that much in brewing, you don’t get many single hop varieties of Pacific Gem pale ales. So we’re just trying it to see how it goes, to see what happens,” Nigel adds, as ICIP spends a bit too long inhaling the smell of delicious post-fermentation beer. Because our own experience of home brewing extends to blowing up a vat of stout in the kitchen at university by drunkenly having at it before it was finished, we ask Nigel to take us through the brewing process step-by-step.

The brewery’s main equipment takes the form of three metal vats, sat in a pyramid against one of the walls. At the top stands the kettle, where “London’s finest” water is heated up, sometimes with the addition of tablets to de- and re-mineralise. Then grain is added – a crystal malt for a lighter beer, with some dark roasted malts for a ruby red colour. Water – to which hops has been added – “sparges” – mixes – with the grain to make wort. The wort boils, and hops are added at different stages – sometimes after 45 minutes, sometimes after five, sometimes after the boil (“dry hopping”).

“We want to get that killer pale ale,” Nigel explains. “That’s what it’s all about really. One really nice pale ale and we’re there. We want to make a really good pale ale and then we’ll crack on and try something else.”

Once the wort has been cooled it’s transferred to the fermentation tank for that all-important yeast-dropping-moment we intruded on earlier. We leave the heady warmth of the brew room for the cool of The Queen’s Head’s cellar to ask Nigel why he’s decided to make the jump from beer fan to brewer.

“I think little neighbourhood breweries are the way forward as more brewpubs pop up in London,” he tells us. “You don’t really want to be selling it off off-sales, because it’s so labour-intensive you’re not going to make any money out of it. So having on-sales and doing interesting stuff with it makes sense. We’ve got the pub, we’ve got the space. You know, what’s the worst that could happen?”

Well, it could explode, ICIP reflects. But this professional kit is a million miles away from our grotty kitchen set-up. About £10,000 worth of kit away, it transpires. And Nigel is right – a handful of London pubs, including The Cock Tavern and The Botanist, are already brewing and selling their own, very popular, beer. Local produce is certainly on-trend and more environmentally friendly – and you can’t get fewer “drink miles” than the 20-odd feet from pub cellar to glass.

“If people can make good beer in their cellar and sell it so it’s at a more accessible price, I think that’s a positive,” Nigel agrees. Brewing currently takes up about a day-and-a-half of his week, but could become more of a passion when his enthusiasm for landlording’s antisocial hours diminishes. “I’m quite sure my girlfriend would like to see me sometime. Not actually 100% sure, but I just presume,” he adds. 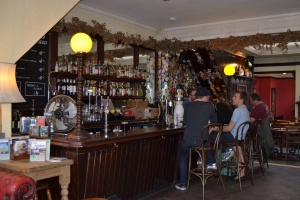 “The guys from The Southampton Arms [Highgate, north London], back in the day,” he answers immediately. “They were brave enough to do such a stripped-back offering and it’s worked so well. They were the ones, when we were looking at taking the pub on, we thought, d’know, if they can make this work, we can make this work. That they made it work means there are people who are willing to go somewhere that’s all about good beer, not about fish and chips. That was quite reassuring, really.” For the time being it’s IPA all the way – “It’s not about being left field. That stuff’s fine, and I’m sure that there are people out there who actually like all the random sour beers and chilli beers out there… but having a really good pale ale would be the goal”. A traditionalist, Nigel is philosophical when we ask if he’s thought of adding peaches, nectarines, digestive biscuits or essence of badger. “What’s the point in doing that if your base product isn’t great? Are you trying to mask something? What’s wrong with just trying to make a good pale ale? If that is not an honourable task then I don’t know what is.”

Up the ladder we scramble to catch a glimpse of the proposed branding. We can’t reveal much, because we promised we wouldn’t, but these bottles will nestle well – but stick out from – other well-known labels. They’re designed with the drinker in mind, with thought put into how identifiable they’ll be from the other side of the bar.

This is certainly the most local brewery tour ICIP has ever done. As we toast the IPA’s future success with a shot of their homemade (scrumptiously orange and juniper-y) gin, we ask Nigel one last, crucial question. Has he created a beer he wants to drink himself? A definitive, emphatic, yes.

We look forward to raising a glass of The Queen’s Head’s own IPA to that.

2 thoughts on “Down the hatch: beer goes underground”