Like most of the breweries who are part of the recent beer boom in the capital, Camden Town is a relative newcomer. The brewery was established in 2010 after Jasper Cuppaidge grew tired of sourcing beers from all over the world for his pub, The Horseshoe in Hampstead. Why shouldn’t we be able to get great beer made right here in London? He began brewing in the cellar of the pub and in the same year Camden Town Brewery was born, moving into the railway arches by Kentish Town West station in north London.

Three years on, the brewery is thriving; its brand one of the most recognisable in the London craft beer scene, it can be found in bars across the capital and they have just scored a distribution deal with Waitrose supermarkets across the country. The brewery boasts a small but popular brewery tap which opens Thursday to Saturday and sells branded ceramic “growlers” – bottles – for beeraways.

Like many breweries, Camden Town has begun running tours of their facilities for interested beer fans. I was a little apprehensive about the tone, as at the last brewery tour we went to – Meantime Brewing Company, in March this year – I was referred to as “my little princess” the whole afternoon, and the tour guide dropped in casual date-rape jokes between beer tastings. I was pleasantly surprised by my experience at Camden Town.

We were early for our 6pm tour, so we grabbed a drink in the bar first, giving us an opportunity to try their USA Hells – a variation on their flagship lager, Camden Hells, made with American hops (crisp with a citrus bite). Before long our guide, Mark, gathered the tour group together. There were ten of us on the tour – eight guys, two girls. I asked if this was a typical ratio but he said it was usually a fairer split and we just happened to have two guy-girl couples and then two groups of guys in our contingent.

We started with a chat about the history of the brewery and a frosty jug of Camden Hells. Standing beneath one of the six huge fermentation tanks, we learned that each one can hold 12,000 litres. As it stands, Camden Town’s brewing capacity is currently 2,000 litres, so they have to brew the same beer six times to fill a tank. I asked if this made it difficult to invest time and resources in new beers or collaborations with other breweries. Mark told us this was very much the case, and that this was part of the reason why they have a relatively small core range of beers, but they are considering expansion in the next couple of years which could see them branch out.

Next we chatted malt and hops, trying the pilsner malt that is used in both Camden and USA Hells and some roast barley malt, used in Camden Ink. It was interesting to learn that even in dark beers like Ink (a stout), no more than 7-8% dark malts are used. We also passed around sacks of hop pellets, and it was incredible how much the hops from different continents vary in aroma and strength. The German hops used in Hells were mild in comparison to the distinct citrus tang of the American Citra and Cascade. This gave us a real taste of how different elements come together to create the range of flavours and aromas we are used to when tasting beer.

Moving through the brewery, we learned about the filtering process. Camden Town is one of few breweries who do not use isinglass – a collagen substance obtained from the dried swim bladders of fish – for filtration. They have a machine to do the filtration fishy-free, but they also experiment with leaving some of their beers unfiltered – such as Unfiltered and USA Hells. Mark told us that the filtered product is considered more aesthetically-pleasing, but actually the unfiltered version had an added depth of flavour.

Next we came around to the packaging area. Camden Town has recently invested in their own canning facilities to complement the bottling they already do on site. They were canning Camden Hells for sale in Byron hamburger restaurants during our visit but it will be interesting to see what else they bring out in cans in future.

Our tour complete, we headed outside to perch on empty kegs and polish off what was left of the pitchers of beer that had accompanied our tour. We had the opportunity to chat to Mark and ask questions – first thing I wanted to discuss was this image from the marketing for Camden Ink. 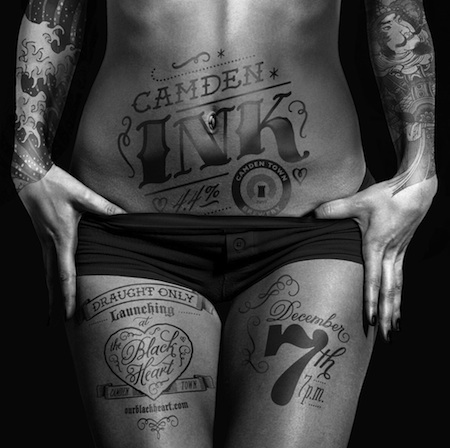 Using a male ICIP spy (my husband), I only discovered this because he reported its existence in the mens’ toilets. What did Mark think of this campaign, and did he think it alienated female drinkers? Apparently an ad agency were given a brief which played with both the name of the beer and Camden’s anarchic reputation, and they delivered a different design originally (with no female body parts). The R-18 version was actually a last minute addition that was only used for the launch party at Our Black Heart in Camden in 2011, but it hasn’t been used for any other publicity. Even the Facebook event for the launch, still visible on Facebook, uses the original artwork – which suggests that Camden Town were aware that the crotch-shot approach could put off women drinkers. I appreciated Mark’s honesty, but raised an eyebrow at the presence of the picture in the Gents’ – there was certainly no cock-shot with a “Camden Hells” tat down the shaft in the Ladies’. I also spotted this ad on the wall in the bar showing a woman quite literally being treated like a piece of meat. Oh well, one step at a time…

Leading on from our report on the number of women at the Great British Beer Festival earlier this week, I asked Mark what the gender split was like at the brewery tap. He reckoned it was pretty much 50-50, which was interesting to hear. There were certainly plenty of women in the bar that night and a friendly, relaxed atmosphere. After my experience of rape culture in action at Meantime earlier in the year I was pleased to see there was no such bullshit at Camden Town and I wasn’t made to feel like a pariah for asking questions or showing an interest.

After Mark had called it an evening, we ended up chatting into the night with two fellow tour-members. We talked about the beer revolution, we talked about women beer fans, we shared notes on favourite breweries. And when one of my new friends went up to the bar to get a round in, he got me a pint – no questions asked. Bloody brilliant.

The Camden Town Brewery tour runs on Thursday evenings at 6pm and costs £12 per head. You have to book in advance on the brewery’s website.