One of my favourite things about the US that I noticed during my all-to-brief trip this month was the wide availability of great, bottled craft beer. Pop-art IPAs and strange, fusion stouts dotted the fridges of supermarkets, off-licenses and gas stations. Historians and PNWesterners will be able to tell me whether this is because the US has been onto craft beer longer, but wandering the booze aisles of Walmart and Costco was (generally) way more rewarding than in most UK supermarkets.

I have but one gripe: America, why are your bottles so big??! The range is probably different at specialist shops, but in supermarkets I struggled to find bottles smaller than 750ml in big stores. That’s ideal for an evening-long drink, but given most beers came in at the 6-8% mark, it meant I couldn’t really get through more than one a night. Was I shopping in the wrong places?

All the beers reviewed came from major US supermarkets in and around Bellingham in NW Washington. 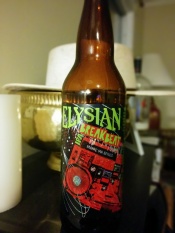 I loved this beer so much I sought out the brewery in Seattle. A lively hop bomb, it pours the golden orange of the Fall leaves.

It’s spicy, herbal and orange on the nose, and tastes lush and full-bodied, with grounding citrus and hop oil to dial it back to refreshing.

How could you not buy this beer? I loved Sriracha before it was cool, and admittedly this beer does little more than a chilli stout usually does (tastes like stout! But spicy!), but that’s no bad thing.

The real, lingering chilli kick perforates the bitter chocolate of the blackened malt, leaving a sinkable stout that doesn’t taste its 5.7% abv.

The metal-punnage! The label! This dark double alt from neighbouring Oregon sits atop a sweet, burned sugar malt.

It’s that malt that makes the beer – it’s nutty and sweet, with raisin and a hint of dried cherry. Light enough to stay in the background, but with a robust caramel taste, this beer would go really well with a roast dinner. Like Christmas. Topical beer klaxon!

This psychedelic riff on a Tripel is a gorgeous, silky sweet play on the Belgian style, rolling in herbs and ripe fruit. It pours a cloudy orange with a delicate, white head. With plenty of funky depth from the yeast and juicy fruit from the hops, this is a lovely beer to savour – slowly, BECAUSE IT’S A WHOPPING 9 PER CENT.

END_OF_DOCUMENT_TOKEN_TO_BE_REPLACED

Between the blue skies and snow puffed mountain peaks, it’s been a breath catching cold week in the USA’s Pacific Northwest, where I’ve been earning my keep this week on Cowboy’s Girlfriend’s horse farm.

Washington state – like much of the US – seems to be awash with craft breweries. It’s Nirvana out here for a hophead like me (ha! accidental Seattle pun!). Short on time, I took local advice and headed to Boundary Bay, a multi-award-winning brewery in Bellingham, northern Washington.

This laid-back, sometime-grunge and sometime-artisan bar and bistro is typical of its trendy hometown. It attracts the town’s own brand of be-Conversed hipster – hamsters, short for Bellinghamster, I’m told – and has an outstanding menu with plenty of Vegan/Veggie options, free hot, local cider and a line of t-shirts. 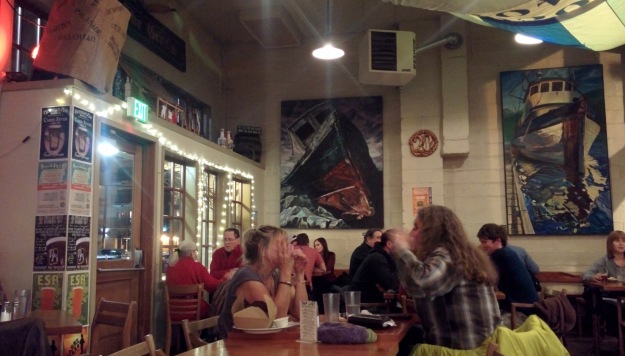 A stone’s throw from the Pacific, the independent brewery is nautical-themed, with huge tranches of wood and big, bold paintings of the nearby drydock. It opened in 1995 and sits in a restored 1922 warehouse in the centre of town. The brewery prides itself on bolstering the local economy and community groups. Last year it was named Washington’s 2014 Small Philanthropic Business of the Year.

Most importantly, the beer is superb. With just an evening to get to know the range, I opted for a 6-shot board, which came with a handy cheat sheet.

All the beers were beautifully balanced, and came just as fresh as you’d expect with the taproom next door.

Here’s a guide to the full range.

My top tips, if you’re lucky enough to be in the area: 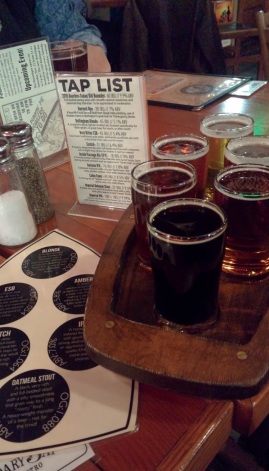 Best Bitter ESB: I’m not generally a fan of bitter (I know, what kind of British beer drinker am I?), but this lovely orange-gold, crystal clear beer was delicious. Some citrus from the subtle hopping, but mostly a smooth, light caramel.

Amber: I’d call this a thick glass of mahogany rather than amber. Warmed, it’s got a lovely, floral aroma, all sugar sweet and marshmallow.

This is my first time in the US and I wish I had longer to go beer exploring (beerploring!). So far, the US craft scene is everything I’d been promised. Stay tuned for a Best of the Bottles round-up.